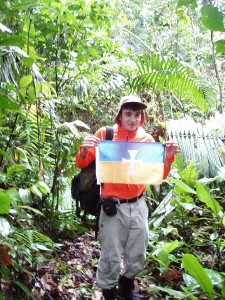 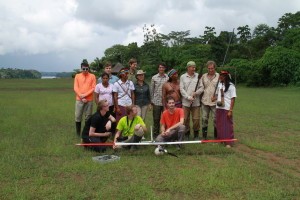 Starting from the left in the lower row: Severin Mainz, Niclas Purger, Benjamin Bachmeier. The second row from the left is myself, I don’t know the name of the two tribe members, then Mascha Kauka, Domingo (President of Shartamensa), Dr. Siebold, and Dr. Krzystek. In the last row is Fabian Braun, Christoph Oberndorfer, and Jonas Wilhelm (Image: Hochschule München)

We left for Ecuador in early November, leaving early in the morning we took a fifteen hour flight from Munich to Quito where we met with our guide Mascha Kauka. After another day of traveling we finally made it to Shartamensa. We had chosen November because it is the dry season for the region that we were mapping. We were able to use the village’s empty hospital as a staging area for the assembly, it took a day to get everything setup. The second day in Shartamensa we started to doing test flights, we found that after about 2pm the rainstorms roll in which makes flying impossible. The third day I joined the Geoinformatics team on a trek into the rainforest to the big tree which stood at about 60 meters tall. We pushed through a swamp and had to hack through the underbrush to get there but the tree was absolutely incredible to see. The tree was about the size of a car and towered well above the normal canopy. The Geoinformatics laid out a gps points that made the mapping for the area accurate down to a few inches. We managed to get back to the village just before sun down and prepped for our second trip the following day.
On the second day of exploration we left quite a bit earlier and so we actually had lunch at a temporary camp that was set up just off the river. The flights went really well, we only had a couple of hard landings but the damage wasn’t too bad. The stay was actually incredible pleasant, we got to see a lot of the Achuar culture, including a lunch on the river, demonstration of their formal greetings, and we got to try a lot of local food. Some of the more unique food and drink was cauim (a traditional type of beer) and roasted grubs. We got to take a trip to a sacred waterfall which is visited anytime the village is struggling. They believe that washing your hands in the waterfall can cleanse your soul. On our last day we spent time with some of the locals playing volleyball and soccer and participated in a cultural exchange between the team and the village.
After the week in the Amazon half of the team returned to Pujo while the second half remained in the Amazon to track down the aircraft after a failure occurred in the autopilot causing the UAV to go down 2 kilometers into the rainforest. Those of us who went back stayed in a city called Baños which is well known for its volcanic hot springs. We spent a day in Baños and waited for the other half of the group to join us before heading to the hot springs. We actually got the opportunity to see a small eruption as we headed away from Baños. We wrapped up the trip with a few days in Quito checking out the Equator, the Equator park, the crater, and the Basilica. The city was beautiful and I would love to go back. My understanding is that team might be going back map the Galapagos, and I encourage anyone who is going to Munich next year to try and join the team.