In the framework of Deutschlandjahr, UAS7 produces the event series „Employability (Made) in Germany“ at five different universities across the United States. In January 2019 we kicked off at the University of Alabama in Huntsville, and then visited Evansville, Southern Indiana. Three more exciting events are coming up soon in Wichita, KS, Clemson, SC and Pittsburgh, PA, bringing together German and American university and industry partners, and the students benefitting from their collaborations.

Time to have a look back!

Want to join us next time to learn about career opportunities in Germany? Our next stops will be: Wichita State University (Sept. 11), Clemson University (Oct. 9), University of Pittsburgh (Oct. 18). Check out the series here.

On January 30, 2019, UAS7 and Bremen City University of Applied Sciences launched a series of five events within Wunderbar Together, the Year of German-American Friendship 2019, at the University of Alabama in Huntsville (UAH). Nine speakers from business and academia informed interested participants about study, research and work opportunities in Germany and at U.S.-based German companies.

The “Employability (Made) in Germany” project aims to showcase Germany as one of the world’s leading countries in the fields of university-industry collaborations, dual-study programs, apprenticeships, and educational concepts of applied teaching and research. Throughout 2019, UAS7 will take its unique expertise in applied science education to universities across the American heartland.

The first stop on the itinerary was the University of Alabama in Huntsville (UAH). UAS7 presented at UAH’s Spring Career Fair, and met with old and new business partners. At the heart of the visit was the panel on Employability (made) in Germany, co-hosted with UAH and Bremen City University of Applied Sciences, to which we invited students, alumni, U.S-based German businesses and other partners to learn about career options with a German component. 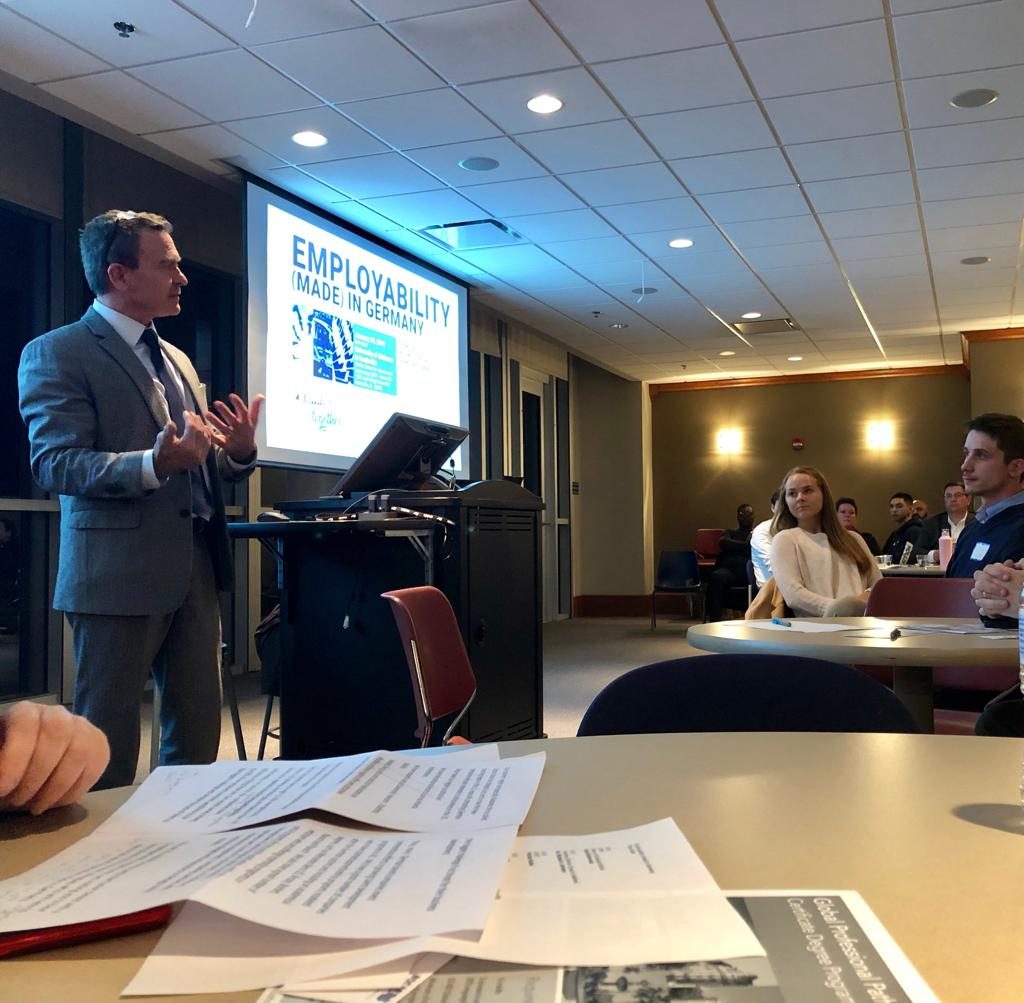 David Berkowitz, Dean of the UAH Graduate School, opened the event with warm words of welcome. Michael Johnson, Honorary Consul of Germany in Alabama (pictured), delivered introductory remarks, followed by Patrizia Nobbe, Director of the UAS7 Liaison Office in New York, who welcomed the audience on behalf of all co-hosts. We were fortunate to have Nicole Heimann, Director of the Skills Initiative at the German American Chamber of Commerce of the Southern United States, deliver notes on German industry and business landscape in Alabama, and the partnerships in existence. She also served as our moderator and presented a surprise guest: UAH alumnus Nathanial Long -and also an alumn of the UAS7 exchange programs in Germany- joined in via Skype. He talked about his exceedingly positive experiences with the exchange and what he got out of it, both professionally and personally.

Nathanial was followed by UAH Professor Brian Landrum (Associate Chair and Associate Professor, Mechanical and Aerospace Engineering) and Nicole Hughes (Director of Study abroad), who introduced some of the existing programs students may apply for to gain international experience and exposure. 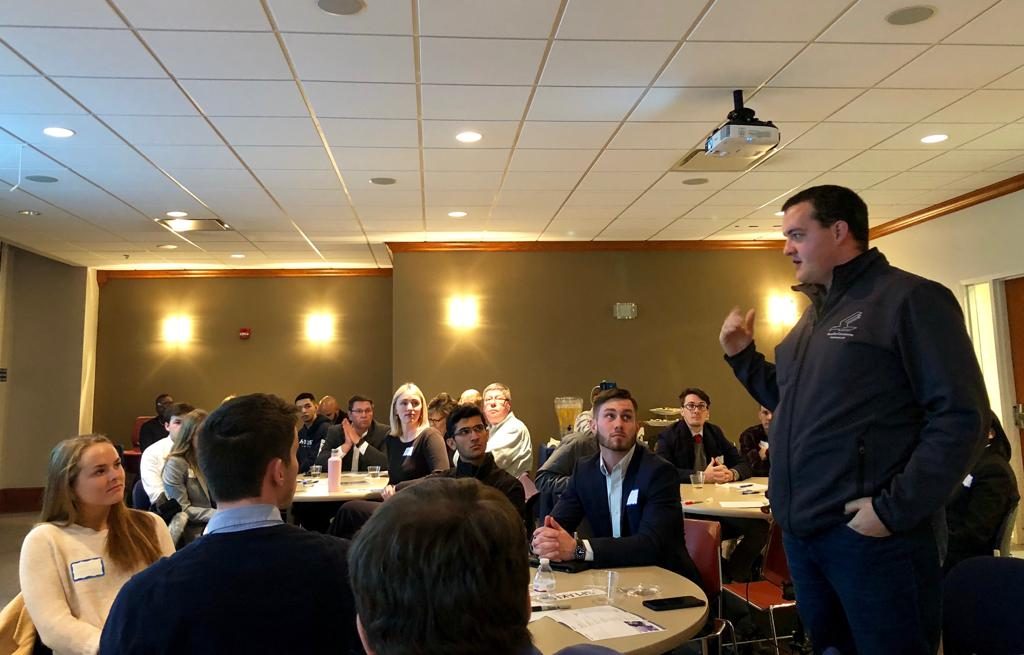 The moderator then turned to our panelists, who were sitting among the audience, and asked each of them, why they made it a point to dedicate some of their time to come speak at this event. This gave them opportunity to present and describe their companies. They are all interested in working with the universities and with students, and since all invited companies have German roots or German connections, they emphasized the importance of internationalization or language skills. The latter point was actually up for debate, with some of the speakers emphasizing that one may also have a successful career in a German company in the US or even in Germany, if German language skills are not your best asset.

In a second round of questions, the speakers discussed career steps and options at their companies, offered advise, contacts and an open door – always. Since the format encouraged networking, the reception was opened right after, to give the students as well as the audiences time to follow-up with those speakers who offered the most interesting opportunities to them.

About 50 students, alumni and business representatives followed the invitation and showed great interest in exchange and career opportunities in Germany and at German companies based in the U.S. The format proved very successful. It allowed for active exchange of information in a setting that encouraged conversation between panelists and the audience. 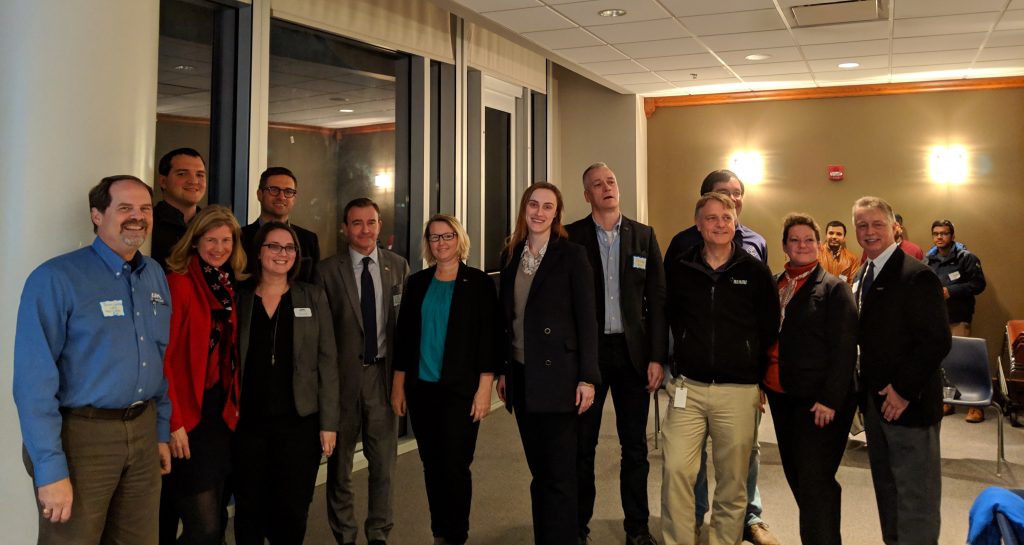 UAS7 is looking forward to the upcoming Employability (made) in Germany events in Evansville, Indiana, Wichita, Kansas, Clemson, South Carolina and Pittsburgh, Pennsylvania. All upcoming Events.