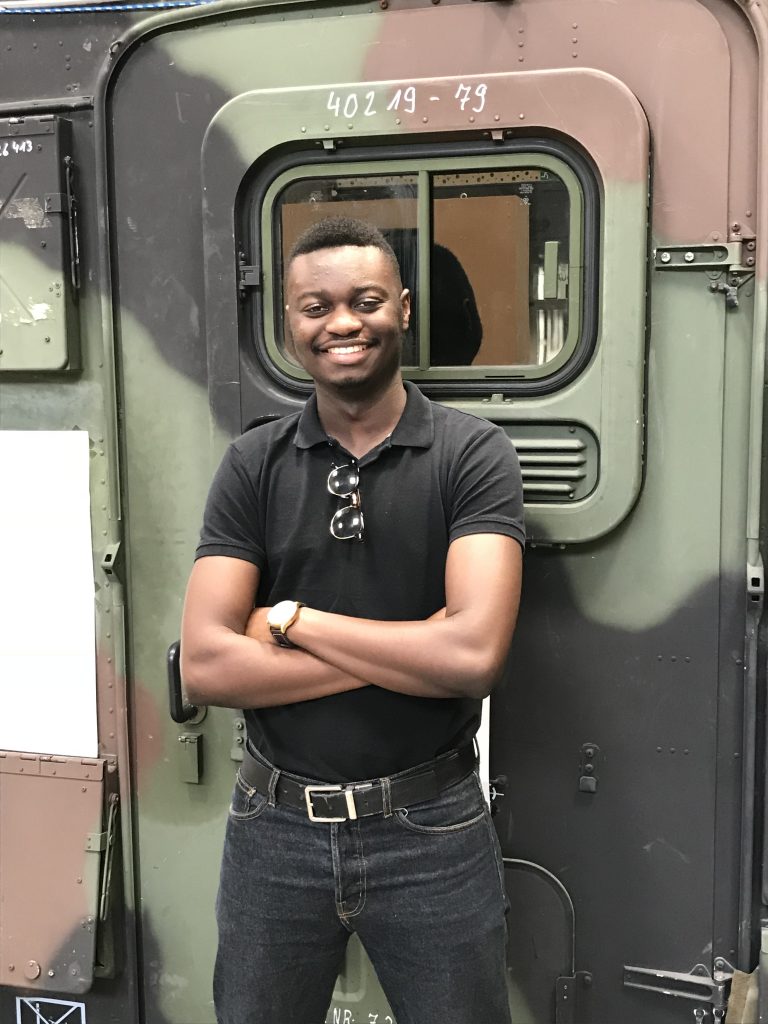 Austin Omolo, a Chemical Engineering student at Drexel University, participated in the UAS7 Internship Program this spring. Austin spent one semester at Bremen City University of Applied Sciences, where he interned at the Energy Engineering lab with Professor Smolen.

The UAS7 consortium cooperates with several University Partners in the U.S., amongst them Drexel University, in order to facilitate student and faculty exchange, research collaboration and shared thematic projects. Students from UAS7 partner institutions are particulary welcome to participate in the Study and Internship Program (SIP), while it is also open to applicants from other accredited U.S. or Canadian colleges or universities.

Upon his return to Philadelphia, Austin was happy to share his experience with us and prospective exchange students. Here is his personal SIP Story:

Austin, why did you decide to intern in Germany with UAS7?

I already had exposure to the German language before. UAS7 provided me with the opportunity to learn more about German culture, to sharpen my language skills, and to delve into the world of scientific research.

What have you enjoyed most about your stay?

I really liked the culture. Bremen is a small, yet vibrant city that has a lot to offer. I really enjoyed the festivals, the beer, and getting the chance to live like a native.

What did you do after you returned from Germany?

I spent some time with family, and about a month later went back to school to commence my next school year. Currently, I am in Philadelphia, and I am halfway done with the school year. I am already looking forward to my next internship. I just might end up in Germany again!

Are you still in touch with Germany?

I do keep in touch with some of the friends I made in Germany. Hopefully, I will get to see them soon!

Last question: what are your future plans?

I plan on completing my undergraduate education and joining the workforce in the energy sector. I also intend on traveling as much as possible. Germany really sparked my interest, and I hope I can get to see the rest of the world soon.

The interview was conducted by Nele Kirstein. 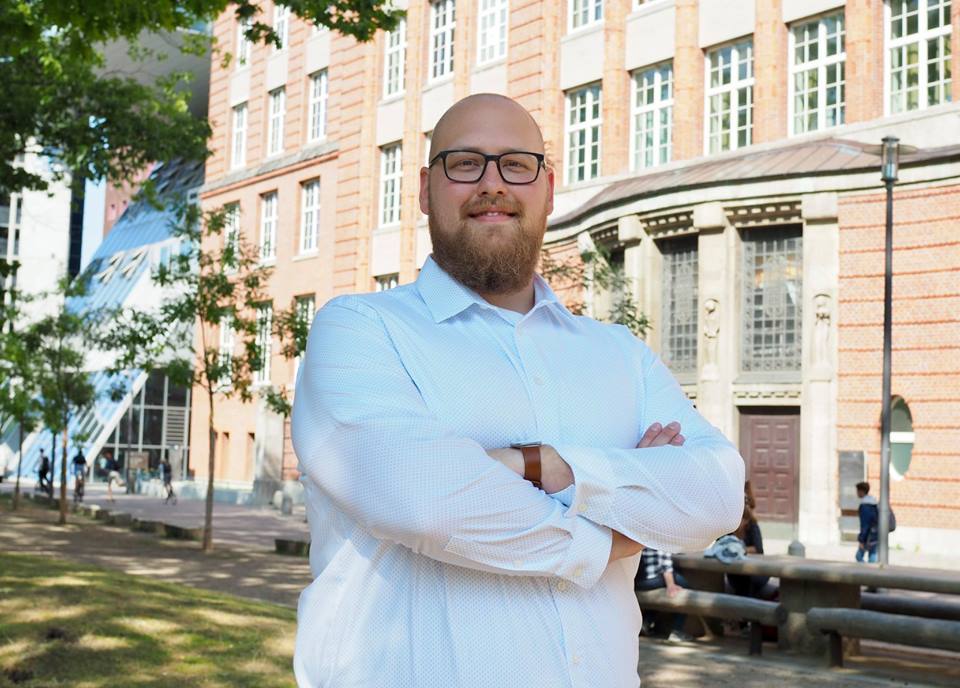 People working in global education are often asked does study abroad really have any impact; do students really go on to work in a different country or in international careers. Sometimes the world is very small and study abroad can be a little bit of serendipity. When Facebook reminded us that it was Mitchell Wagner’s birthday, we sent a message to wish him many happy returns. In reply Mitchell, a former UAS7 scholarship student from South Dakota, wrote »Thanks for the birthday wishes. I am actually at the airport. I’m coming back to Hamburg. I got a job there in software development and tech consulting. I’m super excited!« But let’s start at the beginning.

In 2011 Mitchell Wagner started a Bachelor’s degree in physics at the University of South Dakota. USD requires its honors students to take one year of a foreign language and he chose German. »I had already learned a good amount of Spanish, but the university Spanish classes sounded like a ton of work, so I chose German, since it was apparently much more relaxed.« he admits, honestly. That this decision was going to be a turning point in his life was something he wasn’t aware of at the time. Through learning German Mitchell started looking at study abroad opportunities and Susan Hackemer, Director of the USD International Office, told him about the German UAS7 Study & Internship Programme*. He applied and got a place in Hamburg. »It was a huge step for me, but I knew it was going to be a great way to get practical and international experience.«

In September 2013 Mitchell moved to Germany for his study and internship year. During his first semester he took classes in English in electrical engineering and computer science at the HAW Hamburg. In his second semester he completed an internship with DESY, a national research centre for photon science and one of the world’s leading accelerator centres. »I was very lucky. My university made it easy for the Hamburg classes to transfer back for credit to USD and so the year in Germany didn’t delay graduation. I liked the way the Hamburg classes were well planned out and their focus on engineering from the very start of the programmes. And DESY was super international with people from all over the world working there.«

As part of the HAW Hamburg weBuddy programme, Mitchell was matched with Jan-Tristan Rudat, a German computer science student at the HAW Hamburg. As his “buddy” he looked after Mitchell during the semester and they became good friends. They stayed in touch after Mitchell returned to the US and he even came back to Hamburg for Jan’s wedding in 2016. In January 2018 Jan visited Mitchell in South Dakota. Since graduation Jan had set up his own tech consulting company called Wibas etarate and he was looking for someone to add to the team. Mitchell had just completed his Master’s degree and was looking for a job outside of South Dakota. »It wasn’t planned, but as we talked about things, it just seemed to make sense that he hire me«, Mitchell says, smiling. »And now, nine months later, I am back in Hamburg!«

So, after five years, what is it like to be back? »It is great. Being here brings back so many memories of my semester at the HAW. Everything is still so fresh. I made such great friends and we had so much fun together; studying, travelling or just hanging out and having some beer together«, he says, smiling. »I have missed Hamburg every single day since I finished the programme in 2014. The city is like a drug! I come from a really small town in South Dakota and once you have tasted life in a big city, you can’t imagine living anywhere else.«

Now that the bureaucracy of moving to Germany is dealt with, Mitchell is settling into his new job and getting back to speaking German, »I took another year of German, when I went back to South Dakota, but I obviously hadn’t been using it. At the beginning in Hamburg I thought I was in serious trouble, but a trip to visit Jan’s family kick-started everything and now I can generally understand people, even when they speak full-speed.« He has recently found his own apartment and is looking forward to setting up his kitchen again. Mitchell loves to cook and leaving all his special utensils in South Dakota was one of the hardest things. Once that is sorted then a Hamburg reunion with his Erasmus friends, Mads from the Denmark and Mikko from Finland, is definitely on the cards.

Back in 2013, in his final report about his semester in Hamburg, Mitchell quoted Roberto Assagioli, who once said „There is no certainty; there is only adventure“. Mitchell remembers: »This quote summed up exactly what was going through my head in the weeks before starting my study abroad in Hamburg. And it sums up what I am feeling now. Only now, I feel like I am home.«